Have you ever watched a film, recently or in the past, and been enchanted by the scenographic attention in the rooms or the furnishings of the interiors? When setting the scene for a film, the architecture and the spaces must be carefully studied and chosen in order to make the film credible and high quality. In some films, historical icons of design appear, inserted in particular contexts, often with the aim of stimulating the attention of design fans. As an example, in the movie 007 – SkyFall, in some shots it is possible to see the Arco lamp by Achille Castiglioni.

You will probably also have imagined: a chair, a sofa or any other piece of furniture seen in a movie, in your interior. Furniture in films often has a symbolic function, not just a scenic one. That’s why today, I want to talk to you about the furnishing in a particularly successful film adaptation. Whether you’re a fan or not, I’m referring to the trilogy of “50 Shades” by E.L. James with Dakota Johnson and Jamie Dornan. I will not judge these films (it’s not my job and this isn’t even my prefered film type), but I want to show you ten fantastic design products that appear in the three films (50 Shades of Grey, Darker and Freed) and that will stimulate your pleasure of furnishing.

The Sequoia table by Brabbu is – as the Portuguese house quotes on the official website – a force of nature. It takes its name from the homonymous tree, among the largest and tallest in the world. Does this ostentatious egocentrism remind you of anyone?

Every love story has its own particular light, that between Christian and Ana is illuminated by the warmth of different lamps, positioned in key points of the apartment. Two Vellum wall lights by Brabbu, in antique brass and Nero Marquina marble, are suggestively positioned in the entrance hall on the first floor.

Not far away there are two other lamps by Delightfull, Ike (here the strict Nordic style meets a taste of the south) and Turner (yes, inspired by the singer of Simply the best!). Designed to illuminate large rooms with diffused light, Crown Major by Nemo, a chandelier (two in total) that illuminate the dining area.

Space also for an icon by Vitra, La Chaise designed for a competition held by the MoMA in New York in 1948 by Charles and Ray Eames. This masterpiece of the two American designers, is in Mr Grey’s room, right in front of the panoramic view that can be enjoyed from his bedroom.

There are also sophisticated references to music with Boca Do Lobo’s Symphony, the sideboard inspired by the tubes of a church organ and the violin’s curves, not surprisingly placed near the piano (remember the scene in 50 Shades of Grey?)

The unlimited versatility and flexibility of the G-sofa, the fully modular sofa by Limitless Calgary, that adapts to the sinuous curves of the body. G … sofa, do you get what I mean?!

Sebastian Herkner’s Bell table is a sculptural presence in Ana’s wardrobe room. Each Bell is made by hand, which makes them all unique.

Moving into the dining area, the embracing shape of Minotti’s Aston dining chairs, they master the room with their padded structure resting on tapered legs of solid ash wood.

Nothing has been left to chance, everything within this domestic microcosm seems to encourage pleasure. The personality of the leading actor seems to emerge in a luxurious and elegant style. The scenographers have transposed the essence of the plot into the spaces, giving voice and importance to the corners of the house that are less fundamental in respect of the main narrative events in the film.

These are the 10 design products that I preferred in the Grey & Steel apartment. If you want to take a look at all the spaces, including the red room, I refer you to the official site, where you can “walk” between the rooms and open a few doors.

So what do you think? Do you like these fantastic design elements? Which of these do you prefer and maybe you would like for your home? Let me know in the comments 🙂

• Schaffer Residence: the house of “A Single Man” by Tom Ford

Symphony sideboard by Boca Do Lobo 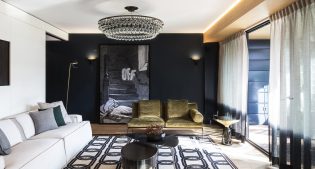 PREV
An eccentric, minimal and refined apartment in Lyon 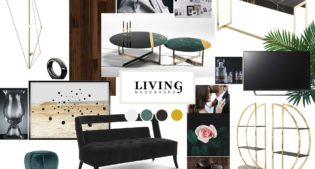 NEXT
How to furnish the living room: my inspirational selection for Maison & Objet