Items and accessories made in Italy

A few years ago, shortly after leaving the Industrial Design faculty and starting to work as a freelancer, I was fascinated by a number of companies in the industry; for the appeal of their products and because somehow they embodied the professional world I wanted to be a part of.

One of these companies was Lettera G, a company from Milan, that makes its creativity and high manufacturing its banner.

Struck by the freshness and originality of their products, I decided to come up with the courage and contact them, proposing myself as a designer. Unfortunately, the company’s response was negative due to their production demand. Basically, they did not plan to expand the product catalog and this put me out of the game.

I tried to contact them again after almost a year later, but the answer was still negative. I tried again a month later, but with the answer always being the same, I ended up giving up on any hope of a collaboration.

But then, a few months ago, when I was checking my email, now years after having contacted Lettera G, I found an email from them! They were interested in my blog and even suggested a collaboration… you can imagine how emotional I was! 🙂

Afterwards I was invited to visit the company and during this experience, I was able to get to know one of the founding members of the brand, Massimo Giovanardi, who is above all the owner of the company Giovanardi S.P.A., that’s been open since 1919

Massimo is person that is inspiring, creative, and passionate, who pours all of his positive energy into Lettera G, a brand that began in 2007 and is now undergoing a huge remodel. That is why I am so happy to be able to work with them and join the brand at this stage of “rebirth”

Lettera G has succeeded in creating a new way of approaching the design market over the years, utilizing the creativity of young emerging designers from the Politecnico di Milano. The catalog is full of functional, refined, and fresh products that give off a totally recognizable touch to any environment.

Lettera G has succeeded in creating a new way of approaching the design market over the years, utilizing the creativity of young emerging designers from the Politecnico di Milano. The catalog is full of functional, refined, and fresh products that give off a totally recognizable touch to any environment

Here are some iconic products by Lettera G

Playful, fun, with a touch of color for rainy days. Made of two methacrylate modules that are fixed together by a simple joint.

An unpredictable bookshelf, a preordained disorder of silhouettes and vices where you can put your most precious books. A cultural sculpture. Made in metal or metal/wood versions, free standing Big and Slim, and in the Modulus wall or stand versions.

“This is not a table and you are not reading”: a small table, a tray, and small carved phrases. Surreal and destabilizing, they even suggest fun ways to use it.

This is an original and elegant container that preserves delicious chocolates, bijoux, or anything that needs “precautionary custody.”

Plastic and roaring, the lions interact with the candlesticks/flower pots almost like monolithic elements. Refined and tactile, with a statuesque “Days of the Lion” appeal it is a real collector’s item.

A poetic product that was created as a cutting board with a handkerchief, but I also think it would be perfect as a serving dish too.

If you liked this article you may also be interested in:

So what do you think about this collaboration? Had you ever heard about Lettera G before? Are you curious to know what we have in store? If you have any ideas or opinions, don’t hesitate to let me know, I’m curious! 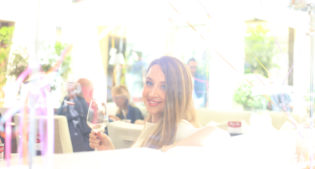 PREV
The Gallery Hotel Art is dressed in POP! 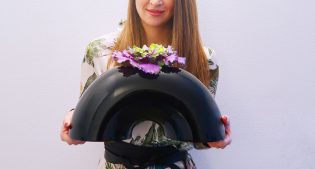 NEXT
Anaconda by Alessio Gianotti