Let’s start with a fact. 70% of those who lost their jobs in Italy in 2020 are women. An alarming and painful percentage, which should spur labor policies to give a strong and incisive signal to our society. And a job would not be enough anyway, I would add. We need to give women the right space, the right context, the right light, equal opportunities. Focusing on the field of architecture, it emerges that 42% of architecture graduates in Italy are women, although it is surprising how few the works signed by women designers are known. It was 2004 when Zaha Hadid publicly declared how difficult it was for women to stand out in this male-dominated field.

They are the women of Italamp that I personally met in Cadoneghe, in view of our first project together. I wanted to call them all by name, to enhance their identity, not so much their qualifications. Italamp is a company in which the female presence is certainly considerable, covering a percentage value even higher than 45%.

About these percentages and women’s rights, I spoke with Arianna, Francesca and Virginia, respectively Export Manager, Area Manager and Designer of Italamp. Three young women who realize themselves every day thanks to the company in which they work.

Italamp was founded by the entrepreneurial spirit of grandfather Matteo, Francesca reminds us, and about the company “we could not have talked  it so proud if two strong, enterprising and charismatic women like Roberta and Manuela had not had the willpower to carry it forward“. Women that, she highlights, “despite having a family have managed to run the company, never missing the maternal role“.

Virginia, who is in charge of the Style Office, immediately clarifies that: “professionalism and the ability to adapt emerge in equal measure when it comes to carrying out a task and / or achieving a goal set by Italamp“.

With satisfaction I also report Arianna’s words, who is talking every day with “countries such as: Middle East, Far East, United States and Canada and most of the time with women who also hold important positions“. Too bad, however, that “in Italy, however, the male component still has a strong prevalence, also due to our legislation, which today does not fully protect women“. The words of Gae Aulenti on the relationship between women and design come back to mind, “architecture is a man’s job, but I’ve always pretended nothing happened“.

Design with no disparity

«The work of the architect is hard work, not feminine. I don’t think you are suitable. Think about it». It was August 1943 and these words are uttered by the architect Giuseppe De Finetti, in his attempt, fortunately not successful, to change the destiny of the young Cini Boeri. I try to imagine the difficulties during the 60s of the female designers who had to jostle to find their space and the right enhancement in a world that was the exclusive prerogative of men. Design has evolved and companies have begun to believe more in the managerial role of women. The gap is still strong, especially talking about remuneration. In Italy, the difference in paychecks between men and women is 23.7%, against a European average of 29.6% (source: Eurostat).

D as in women and D as in design

The history of Italamp is exemplary in this sense because, after being founded and started by a man, it was then successfully carried on by two women, who are now passing the baton to the third generation. Italamp has always had a great female components, the girls pointed out to me, starting with the administrative and logistics department, which is entirely made up of women. Even the production, the beating heart of the company, where the magic happens, is made up of women who assemble, use the drill, the cutter and the screwdrivers with great skill. And then there are the girls from the sales and marketing area. “I would like to underline however – Virginia tells us – that the greatest merit is to be attributed to women in general, who in the world of work, thanks to their courage, perseverance and great willpower, have been able to climb over the last century obstacles that seemed insurmountable and that today, even if it’s a long way to go, can boast of having almost completely flattened a disparity that in previous centuries seemed to be taken for granted“.

Arianna, who works in Export, tells us how the Italamp women with family are able to manage everything thanks to the flexibility of the schedules that the company reserves. The issue of women’s work and employment is inevitably related to family and the protections that are lacking. “Personally, at the moment I have no family, but with the role I play and that I will cover in the future does not scare me to think about of having it”, says Francesca, telling us words that reassure and testify to Italamp’s equal vision.

As an architect I hired a woman …

Back in Italy after an experience in Qatar, Virginia motivates her choice with reasons of “love and passion, with the strong desire to continue to discover what design is, to grow with it, to create a family and fulfill myself professionally“.

Gender must not preclude the role that a person plays in a company. Since the time of grandfather Matteo, Italamp has identified the added value and competence that a person can bring to the role entrusted, Francesca and Virginia confirm, highlighting that business success and professionalism in the workplace are free from any kind of  social or gender distinction.

May the words of Gae Aulenti sound eternal: “ghettoisation in general makes me furious. Starting with those who say: I hired a woman as an architect”.

In a new light: the third generation of Italamp

“Sine luce nulla est”, says Alberto Campo Baeza, remembered by Virginia before announcing her first product designed for Italamp (2021 collection). It is called Universal and it’s woman and man together, a light that wants to break down selfishness, commodification, which, like love, reveals. Light can “make you live an experience in completely different ways: relaxed if right, or nervous and agitated if not designed specifically for a location“, Francesca has no doubts about it. And it is also “a very personal thing that really changes the soul of the room but also that of those who live there. Light is love, warmth, family and home and never as in this last period I have felt its importance“, says Arianna. And I would add that the third generation of Italamp has already an excellent personal light. 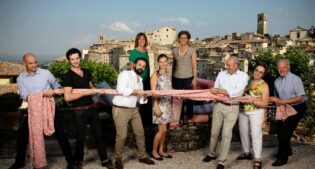 NEXT
"In the name of harmony and renewal", Livio Sassolini tells the Italian company Busatti