Facts: Les First is a company based in Mantua (Italy), born from the intuition, the pure genius, of the architect Massimo Marcomini. Les First has created sculptural lamps that combine design, craftsmanship, myth, art and genius loci, selecting the best production factories between Lombardy and Veneto.

Places: Positano and the Hotel Villa Gabrisa. The Amalfi coast is the perfect scenario to rediscover beauty, after a year that has forced us to sacrifice and social distance.

Protagonists: there was Camilla Bellini, there were the lamps of Les First, but there were also Okeanos, Psyche and other references to the ancient myth, the noble palaces of Mantua and the creatures of the sea.

The concept behind Les First lamps

There are lamps that turn on and lamps that light up. And the difference is not only in words, but in the movements, in the gestures, in the history from which it’s made for. Because the Les First lamps speak a language that is that of human being, in a renaissance of intentions that the year of the pandemic has brought out as a new will.

The ancient breath of the sea, the echo of the sirens’ songs, the hugs of the mountain, the touch of light: these are all atmospheres that recall the myth of Les First, legendary and contemporary, in a continuous happening of emotions.

These lights feel you, these lights talk to you. They feel, because they light up after touching their base. They talk to you because, by managing the contact, they are dimmable. The perceived warmth of the touch becomes a process of osmosis, an exchange of energy, between the interlocutor and the lamp. The warm aura of the LED panels that like a bridal veil embrace the lamps and the symbolic charm of touch technology, technically complete this illuminating myth.

Positano and the Hotel Villa Gabrisa immediately seemed like a gigantic installation, in which the Les First lamps imposed their myth, their light, and I danced on tiptoe in this story that seemed surreal to me from how strong it was. The coastal waters welcomed the myth of light and enriched it with the powerful colors of the sea and the sun that alternated its power over us, often yielding to the authentic light of Les First lamps.

The touch of the myth: Coralli, Psyche and Okeanos by Les First

Three intrinsic characteristics of the work of the architect Massimo Marcomini are the use of the Italian craftsmen for all stages of the project of the Les First lamps, the artisan knowledge, now more than ever in need of shouting its supreme mastery to the world, and the global myth, the one that wisely mixes what has been with what will be, establishing a new time, far away from fashions, which belongs to the time of beauty.

The three Les First lamps, part of the collections that you can view on their website, which I had the privilege of being able to tell you about are Coralli, Psyche and Okeanos.

Architects of the sea, corals take hundreds of years to form. In this sculpture they are made of ceramic, so real that they seem hyper real. Thanks to the allegory of ceramics and light, corals can now enjoy a more eternal aesthetic, which exceeds the time it takes to form. This version with the turquoise base it has a unique beauty.

So beautiful that human language appears insufficient and poor not only to describe it but also to praise it, this is how Apuleius describes Psyche in his work The Metaformoses. And perhaps the description of the Les First lamp can only follow the words of the myth. The version used in the shooting in Positano is the white and gold one. Sublime.

Son of heaven and earth, he welcomes the rest of the divinities who govern the light. This is the role of Okeanos following the dynamics of the myth. And this is the role of the Okeanos lamp, which allows you to control the light of it, with a touch that tastes of eternal. The black and white striped version is memorable.

With Les First a rare alchemy was born, made up of suggestions and ideas, sealed by the climax of Positano. Who knows it’s not just the beginning of an extraordinary journey. Besides, it’s Les First, but not the last. PREV
How to design a product: my experience with Italamp 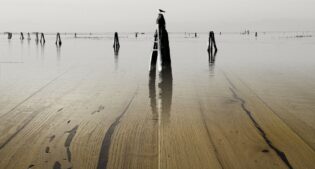 NEXT
A sea of ​​parquet: the briccole of Venice by Ideal Legno