Life is the art of encounters. The one with Giovanna Castiglioni, Achille’s youngest daughter, has been an encounter in which design has been the link between the current reality of the Foundation that bears her last name and the historical importance of her father. Thanks to her privileged point of view I have looked into the everyday life of Achille Castiglioni, without ever separating the man from the designer, an operation that is impossible.

I have obtained a tender but resolute portrait that I want to share. Here are my dialogues with Giovanna Castiglioni during our meeting at the Achille Castiglioni Foundation, from February location of the exhibition-event “100 × 100 Achille”: on the occasion of the centenary since his birth, some of the most important designers in the world have been invited to bring a birthday gift for Achille.

Of the 100 gifts that have been bring for the Centenary since the Achille’s birth, which one, in your opinion, would have been appreciated the most by your father?

Starting from the staple donated by Philippe Starck, who arrives with one of the most famous objects, present on all desks, up to Gum Design that arrives with the classic party balloon. Not to mention the gifts tied to the tickets, I can think of Gio Velluto who brought a bullet.

An unusual object… why a projectile?

As I told you, that is a gift that is completed with the greeting card that reads: “A-Killer, you never miss a shot”. There you understand everything.

It is interesting to see how the designers, Italians, foreigners, better known or less known, wanted to bring a gift to dad in a very different way. In some cases we have objects that speak for themselves, for example Lissoni has brought bonsai scissors, they are beautiful in their own right; in other cases it is necessary to go deeper and understand the thought behind the gift.

Surely these gifts speak and tell us a lot also about the personality of the designers who thought them.

Exactly, because then the question is always the same: when you give someone a birthday present, do you come up with something that pleases you or that pleases the birthday boy? And to this I can not answer, but I can tell you that I personally almost always bring toys, I can not bring very serious things. And more, as my mother taught me, at a party you never bring a gift too expensive, to avoid embarrassing in the other person.

And it is true, the anonymous objects that have been given to Castiglioni are economic objects. And the anonymous object brings everyone on the same level, so there is no more famous Philippe Starck and less known Marco Marzini, but every object acquires its meaning. In the end, we received very many objects, very different from each other, but united by the affection and respect towards Castiglioni.

One thing I liked a lot is the fact of being able to show off objects that are part of the everyday life of us all. Among the gifts for Achilles there are things that we all possess and this is a bit like enhancing and bringing everyone on the same level. In the end, all famous or nobody famous.

We know that 100×100 Achille is an exhibition that will become itinerant. Can you tell us where it will go?

It would be nice to know with certainty the stages but it is not so. 100×100 Achille is a very simple exhibition but still to be built well. The displays that host the gifts are born for the Foundation, and they will not be appropriate to go around, so we’re a little thinking about the logistics. There are fixed stages, already organized, but we can not yet formalize everything.

You know, these days, thinking about our meeting, I was wondering something original I could ask you, thinking about the fact that you have already answered to hundreds of questions about your father, so, to your pleasure, I wanted to ask you to tell me something that is never been told: a curiosity, a habit, an anecdote, an aspect of personality, a taste…

Everyone knows about the fact he liked the eggs but no one knows that he was able to burn them. The hard-boiled eggs, I mean! He was really bad in kitchen. He and I usually chatted a lot, and many times, when my mother wasn’t there and we had to cook on our own, taken from our speeches, we forgot everything, often burning the hard-boiled eggs. The water evaporated and burned the whole shell.

Yes, this is perhaps one of the things that I loved about dad because he was really bad in kitchen.

Do you think that the creativity, your father’s creativity especially, is something you can learn or are something innate?

This question is beautiful, because on one hand my father was certainly born like that, and you could not do anything about it, he was a man full of sparks. His was a constant creativity, linked to remain children, because if we remain children, if we are curious, then we can learn from everyday objects, from what we have around, we can still amaze and, why not, soften in front of what surrounds us. I think we can still taught this today. Today we are too used to having branded objects, we are children of the brand, more than the product.  One of the objects that I really like to talk about is the light switch, which is almost an anonymous object, but it has entered everyone’s house.

If I asked you to describe Achille Castiglioni in 3 words, which would you choose?

On one hand he was very attentive to people, he watched, looked around, absorbed information, he was a sponge. On the other hand, he was almost an inventor, because he thought and built objects that were functional. So, sponge, function and curiosity. These are the 3 words.

What was his favorite color?

There isn’t. This surprise you? The truth is that he did not have a favorite color, because for him color was so important in every project that when he designed an object, color also had a function in it. I’ll give you an example immediately. The bicycle seats, Sella, born for Zanotta in ’57, has a pink color, which is not really the color of affection of my father, but, in that case, the pink color is connected to the pink jersey (Maglia Rosa, in Italian), to the Giro d’Italia. It is, therefore, perfect. An outdoor seat like Allunaggio, always born for Zanotta in ’55, is green, because it is an outdoor seat, put it on a lawn and camouflages itself.

So we can say that every color can be perfect, depending on where it is put.

Do you have a favorite color?

Green forest, which is then the hope color.

And what about the shape of objects instead? Are you more attracted to rigorous or sinuous forms?

I can not respond in a generic way, because the form connects it to the function. For me they are two closely related things. If the object works and has a nice shape, well, if the shape is less beautiful but follows the function in an intelligent way, for me it is equally good.

If we were to look at the market today, thinking about the future, do you think that the icons of design in 100 years will be only museum pieces, or will they still be part of the houses as real elements of people’s daily history?

I wish they were still in the houses. My father liked to enter the houses, in everyday life, in a silent way. He wanted people to buy one of his items without necessarily knowing that it was designed by him or produced by a large company, but simply because they liked it. Objects must keep company, they’re something that must be used, touched, ruined and consumed. It is the natural life of the object, a life exactly opposite to that of museum pieces, which are exposed, but distant and untouchable.

I imagine your flagship product is still the Arco lamp.

Yes, the bow and the mayonnaise spoon. Two opposites.

What is the dream for the Foundation? What do you imagine?

The dream is to keep it open forever, for all future generations.

Are there any future plans you want to talk to us about?

In May, we will present in the Foundation a re-edition of the “Tokyo” exhibition that my father had made in 1984. It is a domestic space, a room in a dining room a little atypical because it is a preparation in which each diner is sitting with his own table but can interact with everyone. We will basically create the environments made by the father. It is the third setup we make of this type. The curator is Beppe Finessi, while Marco Marzini will literally build the whole room. It’s a nice teamwork.

We have seen that on Valentine’s Day, you have interacted with our Facebook page putting a like on Valentine typewriter by Sottsass, which we published on that date. The question is, in your opinion, if your father were here today, what relationship would he have with digital, with social media and with this type of communication?

My father has always been very innovative in his way of doing things. As soon as the first cell phone came out, the one with the antennae that you pulled up with your teeth, he absolutely wanted it. Then he did not know how to use it, but he wanted to experiment, just like the first computer. He was very curious, very attentive to technology. So what he would have been able to do with LEDs and with all the new technologies is something we often ask ourselves.

What approach would he had with social networks?

He was a very private person, so I think he would not have put his things on the streets, so I think Facebook would not have liked it. But Instagram, which I liked the most (we even have a whole graphic project on Instagram that is going very well) I must say that, perhaps, since it is a communication through image, and since he liked graphics so much, probably he would have liked it. He loved the images a lot, in general, and he probably would have liked this social channel.

I think so, surely it’s mine. I go very well with social media, I like it! 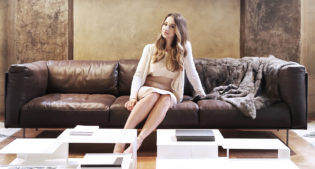 PREV
Design in my view - A new appointment with #designcorner 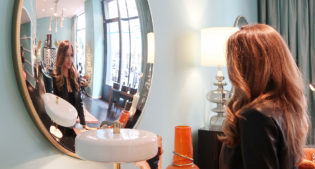 Log in to your email and complete your registration by clicking Yes, I confirm.

Find out more or adjust your settings.

This website uses cookies so that we can provide you with the best user experience possible. Cookie information is stored in your browser and performs functions such as recognising you when you return to our website and helping our team to understand which sections of the website you find most interesting and useful.

Strictly Necessary Cookie should be enabled at all times so that we can save your preferences for cookie settings.

If you disable this cookie, we will not be able to save your preferences. This means that every time you visit this website you will need to enable or disable cookies again.

This website uses Google Analytics to collect anonymous information such as the number of visitors to the site, and the most popular pages.

Please enable Strictly Necessary Cookies first so that we can save your preferences!

Please enable Strictly Necessary Cookies first so that we can save your preferences!